I received some good feedback on my previous home automation posts so I thought I'd throw in another one of my favorite custom jobs before I tackle the mother of them all, which is the home theater.

I have an extreme - and perhaps irrational - fear of my basement flooding. I've invested a lot of money in it, as that's where the aforementioned theater is, but even before the theater was built, the majority of the basement was already finished by previous owners. They put in a bathroom, a large rec room and a nice pseudo-bedroom that I converted into a home gym. So even before the theater, it was a pretty kickass man-cave.

Luckily for me, the previous owners were also probably nearly as paranoid as I am, because they installed an elaborate sump pump system. The main pump was nothing special, but they also installed a (much less powerful) backup pump with a battery backup. The battery also was continually charged and monitored for voltage drops by a wall-mounted unit:

All to the good - I set a calendar reminder for myself once I moved in to check the water levels on the battery monthly. I didn't want any accidents.

And to be clear: I've never had any accidents. But especially once I built that theater, my risk aversion skyrocketed. Since my basement is under the water table, unless the ground is totally frozen, water is trickling in and being pumped out almost constantly. Any serious outage would spell disaster, rainstorm or not.

I didn't plan to significantly improve on the backup situation - I had no reason to suspect that it was faulty, and always performed fine in my tests - but I wanted to be aware if, for instance, the backup ever had to be engaged on its own. We've only rarely lost power in this house, and when we have, it was only for brief periods of time. But if that happened, and the backup kicked in, I'd want to know ASAP.

The typical first measure on the home automation front when it comes to monitoring this kind of thing is to get something like one of these: 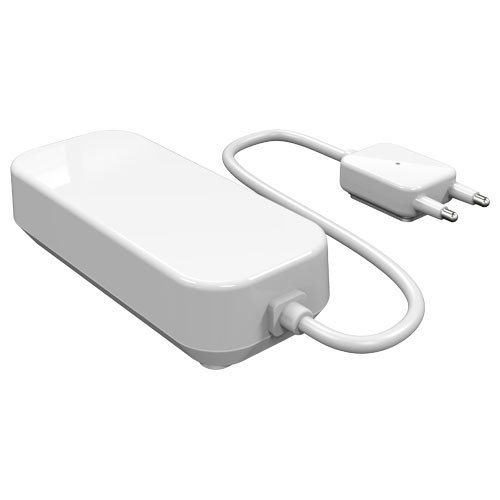 You rig it so that the two prongs are touching the floor, and if water pools between them, the sensor detects it and lets your Z-Wave unit know, and you can alert yourself in any of the various previously discussed ways.

But to my mind, this was too late in the game. If a water sensor gets tripped, that means my basement is already flooded. I'd rather know ahead of time if the backup is engaging. If it is, it could mean the primary is broken, can't keep up, or the power could be out. In all cases, notification is worthwhile.

You can see where I'm going with this. If I could get an alert when a voltage was applied to a doorbell, I should be able to do the same with a backup sump pump. The old "relay and door sensor trick," as I call it.

The cylinder on the left is the backup pump. The black and red wires that power it are also fed into the black unit mounted next to it. The wiring of it is pretty simple: the relay is fed from the same wires:

Whenever the pump draws power from the battery, the relay gets tripped, which then closes the circuit on the door sensor, and lets the VeraLite know. Then I use the obligatory PushingBox notification to let me know the pump is kicking off.

The only other considerations here are the power and network. I have a cheap UPS that my VeraLite, cable modem, and router are plugged into, so if I lose power (probably the main scenario for the secondary pump engaging), I'll still get the alert. However, if the network is also out, then there's a gap.

What I'll probably do if I can muster the motivation is to get a FreedomPop device which once activated for a small fee, will give you 500MB of wireless internet for free each month. That should be more than enough for whatever the VeraLite needs.

To my mind the only problem with this is that if the VeraLite runs on its own network, any applications that need to talk to it or vice versa would have to be on the same network or would have to go through the internet at some point rather than the LAN. There's probably a way to only use the FreedomPop as a backup, but I'm not aware of how to set that up - let me know if have other recommendations!

I've been a gamer since as long as I can remember. My dad got us kids an Atari 2600…

Podcasts! Nothing But Podcasts!

Podcasts are huge these days! But I liked 'em before they were cool, kids, believe me. They seem to…